How to keep dog from licking wound on paw 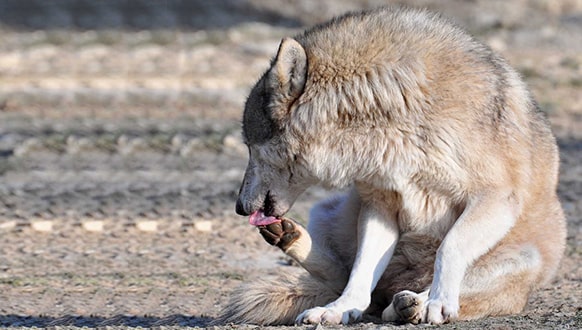 As a dog owner, you might not see any problem with Fido licking his wounds since it’s said that dogs have antibacterial properties in their saliva. Even though that might be the case, licking or chewing the injured area does not mean that it will heal faster, since it will stay wet which is not the state a wound should be in if it is to recover quickly.

Come to think of it, dressing a wound is meant to keep it dry in most cases so that the skin will reconstruct on its own making it more of a natural healing process. Well, before you wonder why your dog has chosen to lick his wounds, there are several facts you have to consider.

When most living creatures have wounds on their body, they will try whatever they can to relieve themselves of the pain so that they can feel at comfort. That is, maybe, why you rub your head after hitting it against a hard surface. In the same manner, your pooch is trying to create a more comfortable situation by licking his wounds.

The only problem with over-licking his wound is that it will make it get worse each time, prompting him to lick it more and more. That gets him into a cycle which you might want to refer to as a cycle of panic, and it does no good in getting to wound to heal.

Luckily, you can consider the following solutions as a dog owner since they will keep your dog from licking his wound so it can heal quick:

Use an Elizabethan collar

Known as the cone of shame by some, the Elizabethan collar is one of the most recommended solutions by a majority of veterinarians. It works by restricting Fido so that he won’t reach for and more than likely lick his wounds. It works perfectly, with the only downside being its huge nature which can easily scare your pet.

Besides, if it were you, would you not be scared at least once by a such a thing that looks as if you were wearing an enormous lampshade around your neck? Before Fido gets used to the collar, you will witness him crashing its sides against doorways and walls.

In addition to that, the cone of shame can, at times, interfere with the peripheral vision of Fido which is why you might want to get a transparent one. As far as collars are concerned, you would say that inflatable ones are probably the best since they won’t sacrifice comfort, which is why they work so well.

Get a bottle of Bitter Yuk

Not every dog will tolerate the Elizabethan collar, and some will find a way to get it off, which is why you have to get an alternative like Bitter Yuk which works because of its awful taste. It’s a water-based product that is non-sticky and very effective when it comes to preventing your dog from licking or chewing his wounds.

Use a t-shirt or boxers

Depending on the location of the wound, you could let your dog wear a pair of men’s boxers or a long-sleeved t-shirt since the cloth will cover the wound so that Fido can’t reach it. If you decide to use this solution, however, you have to keep an eye on the dog since some are amazingly good at “dealing” with cloths and will remove them before you know it.

If you bandage a wound on your dog, you might have solved the problem, since it’s more often a case of out of sight out of mind. Just be sure to get the bandage on firmly but not so tight that it will make him feel uncomfortable.

You shall have to ensure that the dressing is applied with even pressure and always ensure that there aren’t any wrinkles on the padding or bandage. The only problem with using a bandage is that the material can be quite expensive and has to be changed quite often. Besides, dressings can only be used on some parts of the body.

Anti-lick sprays work like Bitter Yuk and can easily be purchased from your vet or local pet stores. As you look for such strips, however, be sure to get the ones that have natural ingredients as they have few potential side effects.

They are easy to apply and can be comfortably used on wounds that are on places other than legs or feet so that your dog is left with an unpleasant taste after licking them, and that will make him learn to keep off the wound.

You can try to distract your pet by finding a distraction for the idle paws and tongues. Instead of getting a bowl of food for Fido which will take a short amount of time to finish, you should hide or scatter biscuits so that your pet tries to find them, and in the process gets distracted.

There are other methods such as using a plastic bottle with holes or a buster cube so that Fido can play around with the container to get the biscuits. If you use your imagination and think of something that will keep your dog’s mind busy, that should, in most cases, work effectively.

Get your dog some boots

Boots are also a good option when you want to cover a wound located on the leg, and you can get them from a pet shop, e-commerce sites, or a vet. You can use boot by themselves or with a bandage for added safety.

Before buying them, however, be sure to determine whether you will use a dressing or not, since using one means that you have to get boots that are slightly bigger. Ensure that they fit so that they stay on without rubbing. The major challenge with using boots is that they have to be used on the legs, and some dogs won’t even like them.

Once on his own, however, he will start “working” on the wound, and that is something you have to take care of. You can try to use the “leave it” command effectively by giving him a toy that will keep him busy so that he can get his mind off the wound.

Sometimes, the poor dog is chewing/licking his cut or puncture because it feels so itchy, and in such a case, you can use products that are meant to relieve itching. All you have to do is seek some assistance from your vet, and he shall prescribe a product that will be effective in reducing the itching so that Fido can feel better.

As seen above, there are various potential solutions to manage the problem. Even though the problem might be quite frustrating, it is quite easy to deal with, as you can closely supervise your dog when you are around or leave the task to the different tools when your dog has to be on his own.

Whatever the case, always seek proper treatment for your pooch when he is hurt, and contact your vet if you notice any abnormality on the wound.

When to Euthanize a Dog with Tracheal Collapse?

If You See These Signs on Your Pet, Contact Your Vet Immediately

4 Tiny Exotic Pets That are Easy to Own