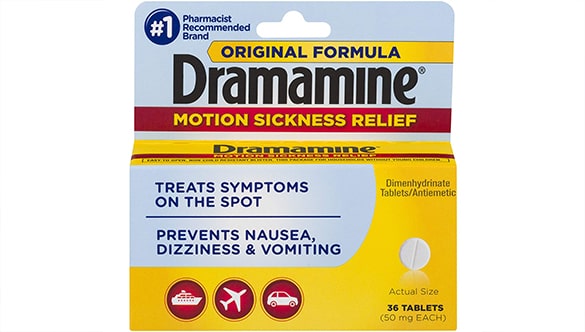 If you are a dog owner or someone who relates with dogs often, chances are that you are aware that these pets are prone to a variety of illnesses that attack human beings. For instance, there are instances when dogs suffer from fever, stomach upsets, chronic pain, anxiety, and other times, motion-related illnesses all of which are common to human beings.

However, does this mean that dogs and humans can share medicines to solve the problems that are common to them? The answer to this question is that dogs can use some of the medicines that we humans use, but not all of human medication is safe for use by dogs.

what is Dramamine and how does it work?

For those who are unfamiliar with the term Dramamine, let’s just state that this is an anti-histamine prescription that portrays anti-nausea properties and a mild sedative action so that it can reduce motion-related sickness and vomiting.

Dramamine’s generic name is Dimenhydrinate, and the drug is designed for use by humans so that it can regulate the symptoms of motion sickness. The drug features Dimenhydrinate which is a combination of diphenhydramine and a mild stimulant known as 8-chlorotheophylline. These work together to eliminate sedation and drowsiness which makes the medication suitable for controlling motion-related illnesses.

In particular, the drug inhibits certain neurotransmitters so that it can prevent passage of information from the vestibular system to the part of the brain associated with reflex actions. As such, the drug is able to prevent dogs and humans from vomiting, experiencing nausea, or any other forms of motion-related sicknesses.

Is Dramamine safe for dogs?

The simple answer: – Yes, Dramamine is safe for dogs.

However, this statement only applies once your vet has approved it to be safe for use with the dogs in concern.

So, Can I give my dog Dramamine?

As I had stated, Dramamine is safe for dogs once your vet approves that it is safe. This means that you can administer the drug to the dog once a professional veterinary has approved it to be safe, so that it can treat motion sickness, vestibular disease, sedation, and anxiety.

Are there instances when I shouldn’t administer Dramamine to my dog?

Having in mind that this drug is not designed for use by dogs, yes there are instances when you shouldn’t give it to dogs. In fact, the drug is not FDA- licensed for use with dogs, which means giving the drug to your dog is at your own risk.

Just to be safe, you should never administer the drug to pregnant dogs or lactating mothers. Furthermore, dogs with liver or kidney diseases shouldn’t take the drug. Besides that, avoid giving the drug to dogs with a high blood pressure, those that suffer from glaucoma, or those that are prone to seizures.

That way, you can be sure to keep your pets safe from the adverse effects associated with the drug. Do not also forget to consult with a vet if you want to administer the drug on a dog that is on another medication since Dramamine can interact with the reaction of certain drugs.

Having said that, what are the side effects of Dramamine on dogs?

Although it is believed that Dramamine is safe for dogs, remember that different dogs have different tolerance for different medication which means that it is up to you to follow up on the wellbeing of your fur friend after administration.

The most common side effects of Dramamine are a mild sedation, urine retention, dry mouth, and loss of appetite. As long as these symptoms are not extreme, then you can be sure that the drug is safe for the dog.

However, if the symptoms become adverse and you happen to note that are affecting the well-being of your pet, then you should talk to your vet who may decide to reduce the dosage of the drug or switch to alternatives of Dramamine.

Besides the common effects of Dramamine, there are times when the effects can be more severe, and these include when your dog reacts by diarrhea ring, losing weight, and vomiting. Therefore, always be on the lookout for your dog once you administer the drug to ensure that it is not experiencing such symptoms.

Once you have decided to purchase Dramamine, which formula should you purchase?
I recommend Dramamine Motion Sickness Relief;

As a pharmacist-recommend brand, you can rely on this motion sickness relief original formula when you are in need of a formula that is designed to treat symptoms on the spot.

The formula features Dimenhydrinate as the active ingredient which means that you can get it when you are looking for a drug that is designed to deliver a fast relief from motion sickness.

Each tablet features 50mg of Dimenhydrinate which means that a single tab is suitable for use with dogs up to 25lbs. The formula is availed in a 12-count travel vial and a 36-count box enabling you to locate the right count based on your needs. It is designed to prevent vomiting, nausea, dizziness, and queasiness.

Q4: Does this drug result in drowsiness?
Yes, it does. In fact, you are likely to fall asleep which makes it good for users who love to sleep during trips that take a lot of time.

Q5: Are these tablets chewable?
No, the tablets are very small which make them easy to swallow.

What is the Dramamine dosage for dogs?

On the other hand, for drugs that contain meclizine as the active ingredient, I recommend that you administer 25 mg once a day without having to consider the size of the dog. This means that you can administer 25mg to a 50lbs dog and 25mg to a 100lbs dog. But remember, this should be once in every day.

But what happens once my dog takes too much of Dramamine?

There are instances when you may be tempted to administer double or triple the amount that is recommended so that you can fasten your dog’s healing process. But, are there consequences related to this action?

Absolutely, yes. Same to humans, taking a dosage that is too much of the recommended can result in adverse effects for your dog.

For instance, once you administer too much Dramamine where meclizine is the active ingredient, you might note increased hyperactivity or sedation. In other extreme cases, a dog can have seizures, increased heart rates, urinary retention, and hallucinations.

On the other hand, an overdose of Dramamine where Dimenhydrinate is the active ingredient can result in a coma, hypoventilation, and eventually death. Therefore, this means that you should be cautious of how you store the drug since you do not want your dog to chew the medication bottle and ingest the rest of the drugs.

We can confidently state that Dramamine is safe for use with dogs. However, always remember to consult a vet before administering the drug since you do not want to risk the wellbeing of your dog.

Remember to mention to your veterinarian when you are dealing with a pet that suffers from lung disease, glaucoma, high blood pressure, kidney disease, hyperthyroidism, urinary obstruction among others so that you can administer the drug safely.

Moreover, if you are dealing with a dog that is on other medications, do not forget to state that since Dramamine can interact with drugs such as sedatives, heparin, CSN depressants, among others. Once you do that, you can confidently administer Dramamine to dogs.

The Best Ways To Treat Anxiety Symptoms In Dogs And Cats

How to Make Dog Cooling Mat

Are you considering to have your dog accompany you for a morning jog or run? Well, this is one of the best considerations, having in mind that dogs ca... 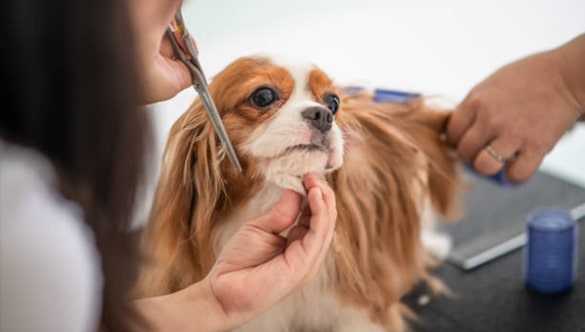 Dogs are considered to be members of the family in most homes. However, they can't manage to take care of their grooming needs. This means that it is ... 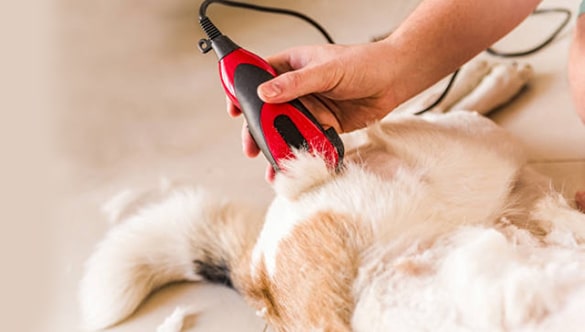 While we have hair, our furry friends have fur. Fur grows on the inner layer of a dog's skin, and it helps dogs regulate their temperatures. Dogs with...

The Best Ways To Treat Anxiety Symptoms In Dogs And Cats

“We may have pets, but when it comes to unconditional love, they are the masters.” There is nothing in the world that can be compared to the joy o...

How to Make Dog Cooling Mat

Who hasn’t gone through the weather issue? Sometimes it’s for the change of environment and temperature. Like human beings, dogs also have...

As a pet sitter or parent to your furry friend, the last thing you expect is seeing Fido slip off the leash. Unfortunately, such situations happen eve...